An Ecumenical International Protestant Church
Email Us At
office@americanchurchberlin.de
Contact Us!
+49 (0)30 8132021
Donate Now! 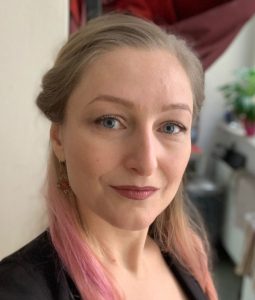 A native of Los Angeles, Maria King moved to New York at 17 to study music, chemistry, and languages at Columbia University and the Manhattan School of Music. Upon completing her studies, she continued to pursue music while working in New York in the finance and consulting industries. Since relocating to Berlin in 2013, she has worked as a freelance translator and musician. Right now she is enjoying learning Russian, her fifth language. She joined ACB as Office Manager in March and is excited to be a part of the diverse ecumenical community of the American Church.